“50% of the cells in your body are not human cells. 99% of the genes in your body are not human genes. You are not what you think you are”. This opening statement by François-Joseph’s talk in the 2020 Convergence’s Science Symposium definitely grabbed my attention the first time I heard it. I couldn’t help but think: what is he talking about? Where is he going with this? As I kept listening to his words, a veil got lift up and eventually, it all became clear.

François-Joseph Lapointe is a biologist and a bioartist working at the biology department at the University of Montreal. When it comes to his art practice, he is interested in the limits of the human species “living in this sea of microbes”. This sea of microbes or microbiome is its own complex universe made up of bacteria, fungi, parasites and viruses found both inside and on the human body. We all have our own specific microbiome, originally determined by our DNA. This microbiome can change according to the environment we live in as well as our diet (Ursell, Metcalf, Parfrey & Knight, 2012). François- Joseph wonders: would the microbiome be affected by someone’s behaviour? Would it change in response to the people we meet? How would it be affected by the interactions we have with the outside world? This was the start of a unique and elaborated quest where, using his own body, François-Joseph traveled the world and put into practice more than 5 different series of experimental performances.

The first series “you are what you touch” involved 1000 handshakes that were used to map the microbiome between François-Joseph and the 1000 people he shook hands with. In the video presented during the Science Symposium, we can see François-Joseph in France, shaking hands with many different people while counting each handshake out loud. It’s fascinating to see the ease at which he approaches people and in most cases, the willingness of the strangers to play along. He repeated the performance in multiple cities including Montreal, Copenhagen, San-Francisco, Perth, and Baltimore. It’s important to mention that François-Joseph’s artistic performances also rely on a much regulated scientific protocol which he follows to the tee. For the 1000 handshakes, he first had to go to a new city, shake hands with a least a 1000 people, count the number of handshakes, collect the skin microbiome at around every 50 handshakes, sequence the microbiome samples and finally, ‘’generate microbiome selfies’’ as he likes to call them. These microbiome selfies are photographs taken from microscope images of François-Joseph’s hand. It features the microbiome after many handshakes with strangers. On one of the photographs, we clearly see a complex arrangement of sphere-like structures of different sizes. Each structure looks like a network of fibers and knots, not unlike a spider web. François-Joseph compares it to a social network, where different bacteria are connected to one another based on their genetic similarities. The more the handshakes, the wider the networks. Some of the ‘’microbiome selfies’’ look like strange flowers or even pinwheels. They vary in shape and structure according the number of hands he shook.

Microbiome Selfie from a microbiome sample of François-Joseph’s right hand after... 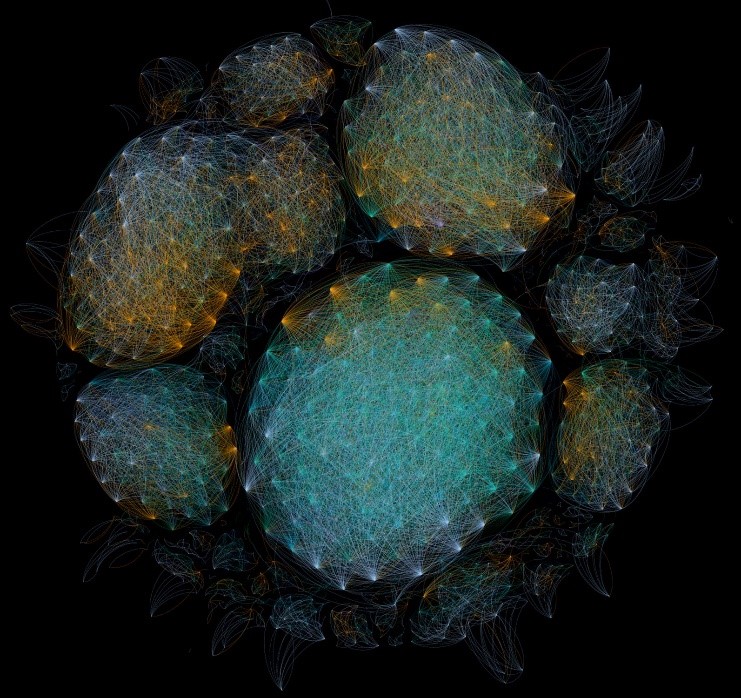 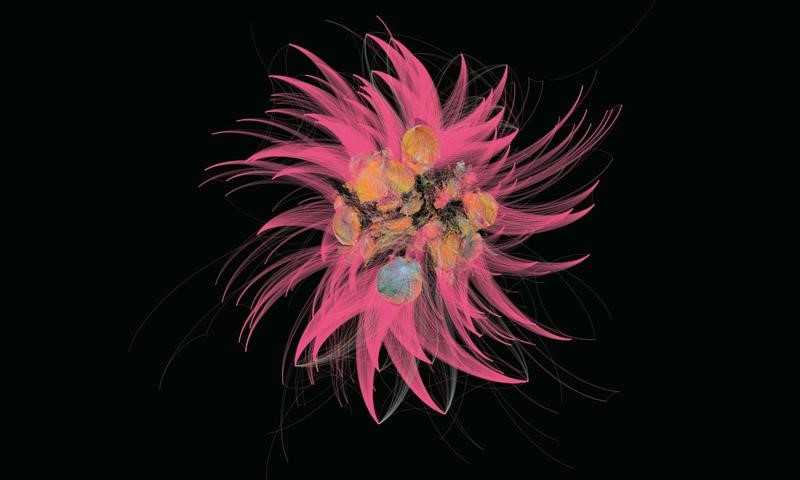 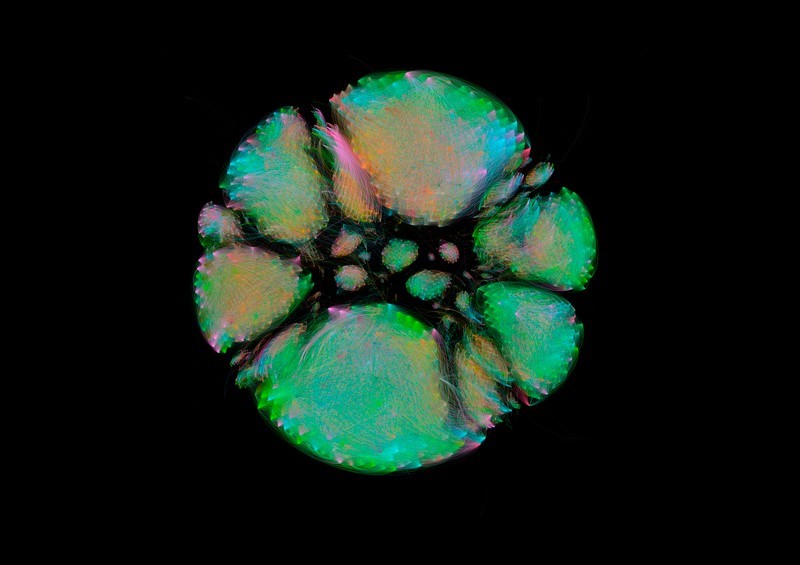 “You are what you eat” is the 2nd performance François-Joseph described during the symposium. Again, he followed a strict protocol; choosing and going to a new city, identifying a local food specialty, preparing the food and eating it as locals would do, collecting the oral and the gut microbiome before and after having consumed the food, sequencing the microbiome and finally, generating microbiome selfies. His most famous “you are what you eat” performance was in 2014 when François-Joseph set himself to become Batman. How does one become Batman? Or rather, how did François-Joseph become Batman? By eating a bat of course! During a field trip to Guinea, François-Joseph witnessed locals eating bats. He ate one. Guinea in 2014 was the epicenter of an Ebola outbreak and bats were said to be the reservoir of the virus. He survived. He became Batman. The microbiome selfie shows the bat’s microbiome mixed in with the artist’s microbiome.

Francois-Joseph eating a bat in Guinea

A tricky yet favorite one of François-Joseph’s experimental performances is “you are what you fuck”. Tricky because he couldn’t do it alone and favorite because, well… I think we can all understand why. The research protocol involved finding a sexual partner, having her or him sign a consent form, engaging in a variety of sexual practices, collecting multiple microbiome before and after sex, sequencing the microbiome samples and finally, generating microbiome selfies. After successfully having found a willing partner, his wife, François-Joseph proceeded to combine their microbiome (vaginal, urethral, anal, digital and oral) in multiple ways; he named this stage “microbial Kamasutra”. One of the “safe for work” image shown during the symposium was a beautiful magenta picture of their oral microbiome reminiscent in shape of a human heart. He named it The Kiss.

Francois-Joseph and his partner’s microbiome mixed together after a long French kiss.

“You are what you pray for” is a project François-Joseph is currently working on. The research protocol is presented as follow: going to a new city, identifying a religious or holy site, engaging in a ritualistic practice as pilgrims would do, collecting microbiome samples before and after the ritual, sequencing the microbiome samples and generating the microbiome selfies. He traveled the world to different cities such as Vatican City where he took microbiome samples from his tongue after having drank the holy water. He took skin samples from his foot after dipping it in the Ganges River in Varanasi, India. He took samples from his forehead after pressing it against the walling wall in Jerusalem. He also visited the blue mosque in Istanbul where he took more samples. As this particular project is still in progress and samples were still being processed during the science symposium, no images of the results were available for us to see. Something to look forward to in the future.

“You are what you are born as”. For his last (but not least) project description, an interesting machine-like object which clearly seems to belong to a mad-scientist, makes an onscreen apparition with the caption Microbiome Rebirth Incubator. This piece was created in collaboration with Marianne Cloutier, his research assistant and was presented in the Science Gallery in London UK as well as Ars Electronica in Austria. It addresses the worldwide C-section epidemic. There exists on ongoing debate in the microbiome literature in regards to C-sections births and the long term health effects on the new-borns. It is known that babies born through C-section are more prone to diseases later in life such as obesity and asthma. There is a practice called vaginal seeding or vaginal microbiome transplant that has been proposed to Microbiome Rebirth Incubator

prevent such diseases. It consists of

inserting a sterile cloth into the mother’s vagina prior to birth and then wiping the baby’s body, face and mouth with that very cloth. Piece of cake. It gets a little more complicated when the C-section arrives as a surprise, like in any emergency C-section. This is where François-Joseph’s project came to play; a mission for the Microbiome Rebirth Incubator. For the research protocol he first had to find a breastfeeding mother, collect a breastmilk sample, collect a vaginal microbiome sample, pour the milk and the microbiome sample in the incubator, shake well and feed the baby with this probiotic cocktail. A real “baby Kombucha” as he likes to call it, that could be used for babies born through emergency C-section. I completely believed that this incubator was the real deal until he pointed out that it is a “metaphorical piece which addresses the physical, psychological and symbolical trauma of having a C-section”. Then again, I’m not a scientist.

In these days of Covid-19 pandemic, the future looks uncertain for François-Joseph’s experimental performances; he was actually supposed to be in China in April 2020 to work on the 1000 handshakes series. When asked about how he is going to proceed going forward, he says that, just like the HIV pandemic were people were trying to figure out safe ways to have sex, he will have to try and figure out safe ways to shake hands and conduct his experiments. ”I would have never guessed that the most dangerous performance I would set up is not eating a bat but shake hands with people! It will change everything”.

I had the great pleasure to chat with François-Joseph and I asked him how his projects changed during this time of social distancing; what is he working on and how he plans to conduct his performances during the pandemic era we live in. Expecting maybe a few ideas here and there, I was pleasantly surprised when he unveiled a bountiful list of ideas and new plans for projects. One of the ideas involves a new way to conduct the 1000 handshakes performance. François-Joseph is very interested in what the reaction of people might be if he was to come up to them and ask if they’d like to shake hands with him. Would they be scared, think he’s crazy and refuse without hesitation? Would they ask him to wash his hands first? Would they ask him to wear gloves? And he wonders, what if he was to try that performance with different groups of people or in different geographical locations? How would mandatory masks protesters react? Would they gladly shake hands with him? What if he was to go to Florida? Or India, one of the worst Covid-19 hit countries in the world? Would they only accept to shake hands with gloves on, if at all? These are just a few of the questions François-Joseph is currently exploring for his next 1000 handshakes performances. He is also working on a project involving the body molding of pregnant women and the “white gold” they produce; the precious maternal milk. I could write a whole other article regarding his new projects and/or modified performances but one of the subject we talked about that truly resonated with me was the fact that because and not despite of the pandemic, different organisations, institutions and exhibition venues contacted him, showing a deep interest in his previous work as his performances are very much connected to the subject of contamination. Some of the places that will exhibit his previous work include the New York Hall of Science for the Culture of Contamination exhibit and the Sinclair Haus Museum in Germany for the What is Nature exhibit. An article about his performances is also in the works for the Pour la Science magazine. As a whole, the pandemic we are currently experiencing clearly didn’t slow down François-Joseph; he quickly adapted to this unusual situation and new ideas and opportunities came out of it. I’m looking forward to François-Joseph’s new works and hopefully, be able to see them in person… and shake his hand.

SINAPSIS: Exploring the connections between art and the brain